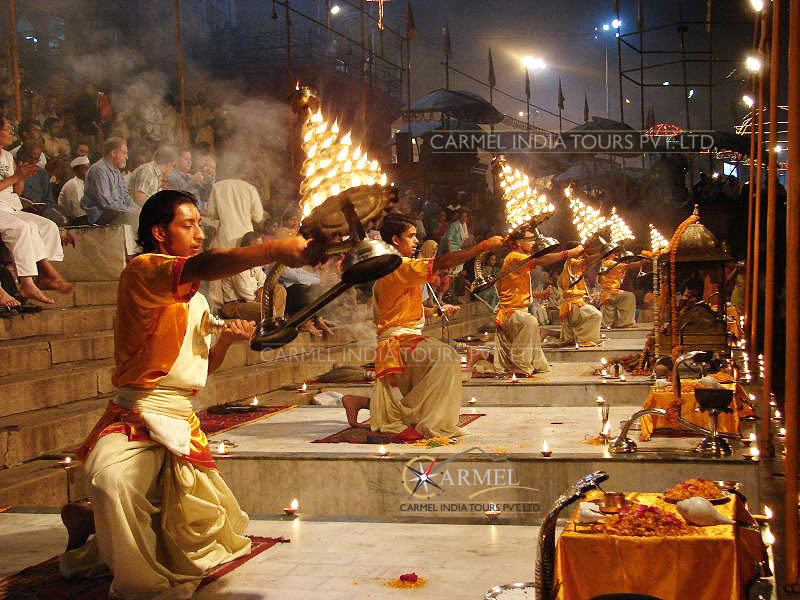 The cultural capital & the holy city of India, Varanasi, also known by the name of Kashi and Benaras, situated on the banks of River Ganga, according to myth, it was founded by the god Shiva. The name of Varanasi derived from the names of the two rivers: Varuna and Asi, a small river near Assi Ghat. It is used to be the capital of the Kingdom of Kashi during the time of Gautama Buddha. The temple of Varanasi destroyed several times by different Muslim rulers, but only the Muslim Mughal emperor Akbar built two large temples dedicated to Shiva and Vishnu in 16th century.

Varanasi is the oldest living city of the world, more than 3000 years old. The culture of Varanasi is as old as the Gange River & Sarnath, the place where Buddha preached his first sermon after enlightenment. The King of Kashi was the organizer of all the cultural and religious celebrations of this city. Varanasi is a symbol of Knowledge, philosophy, culture, devotion to Gods, Indian arts and crafts for centuries.

Benaras is older than history, older than tradition, older even than legend and looks twice as old as all of them put together, Said by Mark Twain. The city got the name Benaras due to miss-pronunciation of Varanasi by the British and Kashi, means the city of Moksha for Hindus since centuries.

Varanasi is one of the most popular pilgrimage points of Hindus and Buddhists, filled with numerous temples, silk weaving, 80 Ghats, which makes attraction of the tourist. It is believed that the holy river Ganga have the power of washing away the sins of mortals. Varanasi city is a Shakti Peethas and the house of one of the twelve famous Jyotirlingas. According to Hindu mythology it is believed that, the city has everything that a disturbed soul seeks and those who die in Kashi got instant gateway to liberation from the cycle of births and deaths.Every devout Hindu hopes to visit the city at least once in a lifetime.
It is famous for its Benaresi paan, its fine-quality silks and Avimukta of the ancient days and one of the largest residential universities in Asia, Benares Hindu University established by Pandit Madan Mohan Malviya in 1916.

Best Places to Visit in Varanasi

Dasaswamedh Ghat:- It is one of the famous and oldest Ghats in Varanasi, situated on the banks of river Ganges. It was first renovated by Bajirao Pesava I in 1740 and later in 1774 by Ahilyabai Holkar, the Queen of Indore. It is most visited Ghats by Hindu devotees because of the religious significance of ten sacrificed horses, sacrificed by Lord Brahma to allow Lord Shiva return from the period of banishment. In the evening experience the Prayer ceremony performing various rituals and religious activities.

Manikarnika Ghat: It is one of the oldest ghats in the city having mythological significance related to Lord Vishnu and Lord Shiva. It is believed that cremation at Manikarnika ghat ensures a safe place in Heaven, as the cremators of this ghat are believed to have the patronage of Shiva.
Assi Ghat: One of the five special ghats visited by pilgrims, situated at the confluence of the Ganges and the Assi rivers. This is a sacred place as pilgrims offer prayers to a huge shivalingam placed under a peepal tree after bathing in the river. It is said that after striking down demon Shumbha and nishumbha, Durga's sword fell and created a curved ditch, which later became the Assi Channel.

Tulsi Ghat: one of the famous ghats situated in Varanasi in honour of Tulsi Das, a famous saint poet,also known as Lolark Ghat.At this Ghats the poet Tulsi Das had written the epic the Ramcharitmanas.The Ram Lila, story of Rama firstly was performed at this ghat. The ghat houses contain ancient items including pillow, wooden clogs, Samadhi place and a beautiful idol of Lord Hanuman.

Kedar Ghat:built by the Maharaja of Vijayanagar , is named after Lord Shiva, who is also known as Kedarnath,which has a beautiful temple, dedicated to Lord Shiva constructed in ancient Hindu architectural style. There is a Parvati Kund, which is a beautiful pond and is believed to have water with high medicinal properties.
Shivala Ghat: Constructed by one of the most significant rulers of medieval period, King Balwant Singh. The name of the ghat is derived from the presiding deity of region, Lord Shiva. The prominent attractions of the ghat are Shiva Temple and a Brahmendra Math, a spiritual centre.

Durga Temple: Durga Temple is also known as the monkey temple Constructed during 18th century by a Bengali Maharani.it is one of the popular temples and dedicated to Goddess Durga. The temple is located on a rectangular tank, which is often called as the Durga Kund.

Tulasi Mana Temple: Tulasi Mana Temple was constructed in 1964 in the vicinity of Durga Temple, Dedicated to Lord Rama.This beautiful shrine temple received its name from Tulsi Das, the great saint poet of 16th century. The walls of the temple are decorated with a famous literary work, the stories of the Ramcharitmanas written by Tulasi Das it has Shikhara style of architecture and aesthetically carved with marble rocks.

Other attractions:
Ramnagar Fort: Ramnagar fort was constructed in 18th century by Maharaja Balwant Singh on the opposite bank of river Ganges. This Fort attracts tourists from all over the world as built with red sandstone. There is a Museum within Ramnagar Fort complex, also known as Banaras Vidya Mandir.

Jantar Mantar: Jantar Mantar is an observatory and love for astronomy and technology gave birth to this beautiful architectural wonder constructed by The Maharaja of Jaipur, Jai Singh in 1737. It was constructed with the aim of measuring the local time and altitude of the place, the declination of Sun, stars and planets and to determine eclipses.

Sarnath:-Situated about 10 km from the holy city of Varanasi, where Lord Buddha delivered his first sermon after attaining enlightenment. On the day before his death Buddha visit Sarnath along with Lumbini, Bodh Gaya and Kushinagar as the four places he thought to be sacred to his followers.Saranath probably derived its name from one of Buddha's title, Saranganath, Lord of the Deer. Apart from Buddhism, Sarnath is also connected with Jainism.
There are many Buddhist monuments and edifices in Sarnath like the Dhamekha stupa, the Chaukhandi stupa and monasteries, museum, Buddhist temples and different school of Buddhism from Japan, China, Thailand, Burma and others. Festival of Buddha Purnima is celebrated here with much fanfare.

The temperature ranges between 22 and 46°C (72 and 115°F) in the summers. Winters in Varanasi see very large diurnal variations, with warm days and cold nights. Cold waves from the Himalayan region cause temperatures to dip across the city in the winter from December to February and temperatures below 5°C (41°F) are not uncommon.
Best Time to visit Varanasi: The best time to travel to Varanasi is during winters from October to March for a dip in the holy Ganges when the temperature is cool but not cold. This is the best time to enjoy moving around the temples of Varanasi and revelling in its picturesque and beautiful environment.

How to Reach Varanasi

By Air
Varanasi is well connected and accessible to major Indian cities and tourist spots. There are daily domestic flights to and from Varanasi to several cities in India. Apart from the state owned Indian Airlines, there are many private air taxi operators that offer their services from Varanasi to other Indian cities.

By Rail
Varanasi is well connected to Delhi, Kolkata, Mumbai and other parts of India. There are two railway stations in Varanasi, the Kashi Junction and the Varanasi Junction (also known as Varanasi Cantonment).

By Road
Situated in the flat Ganga plains, Varanasi has a good network of roads. Frequent public and private buses and road transport to all the major towns of Uttar Pradesh and nearby areas.