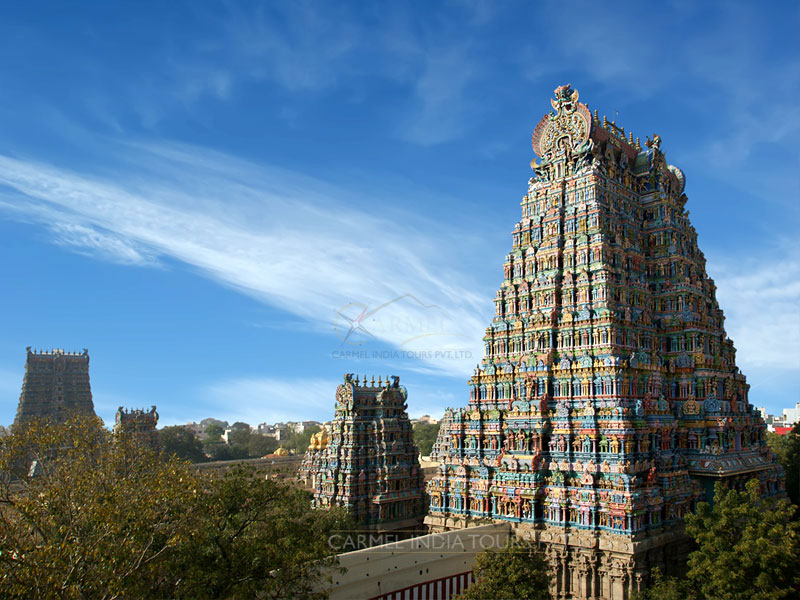 Madurai, the second largest city in Tamil Nadu, is located on the banks of River Vaigai, in the South India. It is one of the oldest cities of India and also known as the Athens of the East. Being the temple city, Madurai comprises of a number of temples and historical monuments. Madurai city has three hill boundaries named as Yanaimalai, Nagamalai, Pasumalai.

According to mythology, Madurai was originally a forest known as Kadambavanam. Once in this forest near a lotus pond, Indran, the King of Gods worshipping a Swayambhulingam (Lord Siva) under a Kadam tree. The king Kulsekarer Pandayan, by clearing the forest, built a great temple known as the Sri Meenakshi Sundareswarer Temple, around the holy Lingam. Later by clearing the forest, he created a lotus-shaped city around the temple.Lord Siva appeared on the naming ceremony of the city and drops of nectar from his hair fell on the blessed city and so, the city was named Madurai, meaning 'sweetness' in Tamil.

As early as the 3rd century BC, Megasthanes visited Madurai, later was followed by Marcopolo and Ibn Batuta.Madurai was ruled by many rulers, it flourished under the Pandiya rulers till the 10th century AD, later ruled by Cholas, Alauddin Khilji, Tughlaqs, Muslims for 50 years, Krishna Deva Rao and Thirumalai Nayak, the most popular one. He created many magnificent structures in and around Madurai. Finally Madurai fell into the hands of the British in 1781. After independence, Madurai became one of the famous tourist attractions with various cultural activities, parks, museums, clubs, yoga and cinema.It attracts thousands of pilgrims every year from India and abroad.

Best Places to Visit in Madurai

Sree Meenakshi Amman Temple
The temple was constructed by Kulasekara Pandya and is one of the most famous temples in South India. The thousand pillar hall is one of the amazing works in the temple that is famous for architectural brilliance. It is the temple's museum and the statues here are exquisite.

Gandhi Museum
Gandhi Museum was constructed in memory of Gandhiji after his assassination. The museum houses a Picture Gallery, which presents Gandhiji's visual biography. The history of Freedom struggle is depicted with 265 illustrations in the Special Exhibition section.

Samanar Hills
Samanar Hills is situated 10 km away from the famous Meenakshi Amman Temple. A natural fountain that is ancient is found here and it is called Pechchi Pallam.

Koodal Azhagar Temple
Koodal Azhagar temple is one such proof of the architectural excellence of the ancient period. It is dedicated to god Vishnu. It is situated 2 km away from the city's west.

Pazhamudhir Solai
This temple t is located on hill top and dedicated to Lord Murugan. The giant steps in front of the temple make for a great climb. It is one of the most beautiful temples in South India.

Best time to visit Madurai
October to March is the perfect time to explore the city .Unlike rest of India, the winter nights here remain warm and never get too nippy.

How to Reach Madurai

By Air
Madurai airport is located at a distance of around 10 km from the heart of the city. The city is well connected to all the major cities of the nation. There are daily flights to Madurai from Chennai, Bangalore, Tiruchi and Coimbatore.

By Train
The Madurai railway station has very good connectivity with all the major cities of India. Madurai falls on the Madurai-Tiruchirappalli-Dindigul-Quilon line. It is an important railway junction of the southern railway, directly connected to Chennai and Tirunelveli via railway lines.

By Road
Madurai city is well connected to all the parts of South India. There is an excellent bus service at regular intervals, which facilitates comfortable journey. Madurai city has 5 major bus stands, from where you can get bus to most of the cities of Tamil Nadu as well as the neighbouring states.