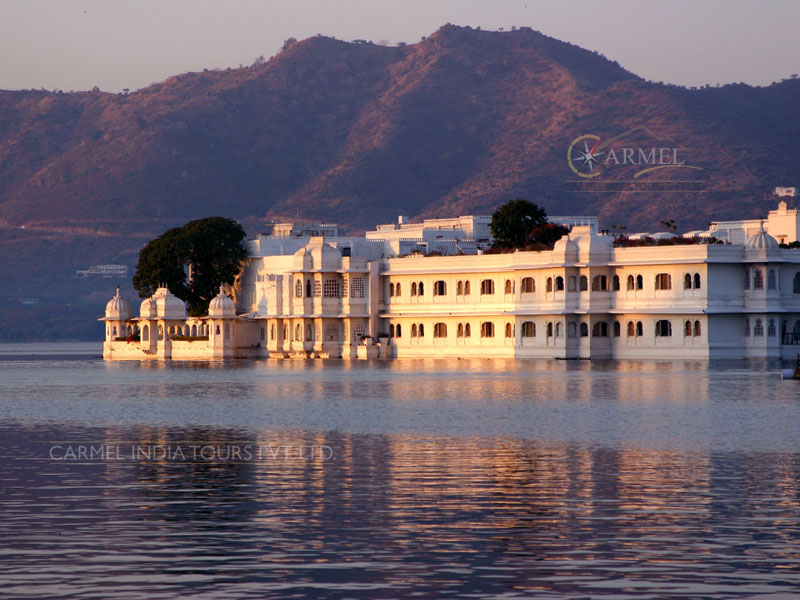 Udaipur the 'white' city of Rajasthan state situated on the east bank of Lake Pichola,in the Aravalli Range, its many white marble palaces reflecting in the calm waters of Pichola lake . Udaipur is regarded as the 'Venice of East'. It is the most beautiful and romantic city on the planet earth with the rich cultural, social and natural heritage, aesthetic beauty and ecological richness, a fascinating blend of sights, sounds and experiences. This city appeals to the imagination of poets and painters, writers and travellers like no other city in the country.

Maharana Udai Singh laid the foundation stone of Udaipur in 1557 A.D. There is an interesting legend associated with the foundation of the city. Once the founder, Maharana Udai Singh, was hunting in the foothills of the Aravalli Range, when he met a holy man meditating on a hill overlooking the Lake Pichhola.The hermit blessed and advised the Maharana to build a palace at this favourably located spot with a fertile valley watered by the Lake Pichhola.

In 1568, Chittor was attacked by the Mughal emperor, Akbar & after him as the Mughal Empire weakened, the Sisodia Ranas, and later Maharanas (the Guhilots or Suryavansh) reasserted their independence and recaptured most of Mewar except for Chittor and Udaipur continued to be the capital of Mewar, till it became a princely state in 1818 of British India. In 1947, When India got independent the Maharaja of Udaipur granted the place to the Government of India.

Being the city of lakes, Udaipur has many more attractions that catch the attention of the tourists, the city boasts of various museums, palaces, gardens, monuments, the mighty palaces, the massive forts with their sheer structure and architecture. The beautiful temples of Udaipur with their spiritual ecstasy and colourful festivals that transport you directly into the royal Rajputana era.

Best Places to Visit in Udaipur

Lake Pichola: Pichola Lake is an artificial fresh water lake that has been named after the nearby Picholi Village the lake was built by Banjara In 1362 AD, a gypsy 'Banjara' tribesman. This beautiful lake?s surroundings and the several islands within the lake have been developed with palaces, marble temples, family mansions and bathing ghats or chabutaras.

Fateh Sagar Lake: Fateh Sagar is an artificial lake that was constructed by Maharana Fateh Singh to the north of Pichola Lake in 1678. Its blue waters and the backdrop of green have given the nickname of ?second Kashmir? to the city and also considered to be the pride of this 'City of Lakes'. The source of water of the lake is the run-off emerging from surrounding hills; the lake is linked to the Rang Sagar Lake and Pichola Lake.Three small islands are located within the confines of the lake.

Jag Mandir: It is also known as the ?Lake Garden Palace?, built on an island in the Pichola Lake, was constructed by three Maharanas of the Sisodia Rajputs of Mewar Kingdom. The palace was also used as a summer resort and pleasure palace for holding parties by the royal family.

Jagdish Temple: The temple is made in the Indo-Aryan style of architecture, dedicated to Lord Vishnu (Laxmi Narayan), is located in the City Palace complex of Udaipur. Originally called the Temple of Jagannath Rai, built by Maharana Jagat Singh, who ruled Udaipur during 1628-1653,it is largest temple in the city.

Eklingji Temple: The temple is said to have been founded by Acharya Viswaroopa, situated at a distance of 24 km to the north of Udaipur and devoted to Lord Shiva. The temple houses a 50 feet high multi-faced black stone statue of Lord Shiva, Spread over an area of about 2,500 square feet.

Shrinathji Temple: This temple of Nathdwara is dedicated to Lord Krishna, is located at a distance of 48 km from Udaipur. This temple serves as a place of worship for the royalty of Udaipur as it is the richest temples in the world.

Lake Palace: The Lake Palace was built in the middle of Lake Pichola over the backdrop of beautiful Aravalli Mountain, by Jagat Singh II, in 1743 -1746.The place was the Royal Summer Palace of Rajputana later it was converted into luxury hotel in 1960 AD by Maharana Bhagwant Singh.

City Palace: The City Palace is Located on the east bank of the Pichola Lake, it has several palaces within its complex. It is a fusion of the Rajasthani and Mughal architectural styles. The palace provides an aerial view of the city and its surrounding as it built on a hilltop. Courtyards, pavilions, terraces, corridors, rooms and hanging gardens make up the entire palace.

City Palace Museum: City palace Museum provides an insight into the culture and history of the Maharanas of Mewar which display the royal family photographs various paintings etc. Together with Crystal Gallery this is prime attraction for any tourist to Udaipur.

Fateh Prakash Palace: Stands along the shores of Pichola Lake. Named after Maharana Fateh Singh, one of the rulers of the Mewar Dynasty, it has been converted into a heritage hotel.

Bada Mahal: The palace is considered as the men?s section of the City Palace, Constructed on a 90 feet high natural rock formation. The palace is surrounded by a beautiful garden, lush green landscaped lawns, courtyards, pillars and terraces, royal balconies, fountains and royal apartments. Painted mirrors, ceilings, carvings on the walls and portraits adorn the rooms of the palace.

Bagore Ki Haveli: Situated on the platform of Gangori Ghat in the vicinity of Pichola Lake. This ancient edifice displays delicate carvings and glass work built by Amir Chand Badwa in the 18th century. A visit to the haveli permits tourists to view the private quarters of the royal ladies, their bathrooms, dressing rooms, bedrooms, living rooms, worship rooms and recreation rooms.

Sajjangarh: The palace is located in the Aravalli Hills, just outside Udaipur, also known as 'Monsoon Palace' as the aim behind the construction of the palace was to watch the monsoon clouds. Built with white marble, the palace overlooks the Pichola Lake and provides beautiful views of the palaces and surrounding countryside. There is a Sajjangarh Wildlife Sanctuary surrounds the Sajjangarh Palace situated at a distance of 5 km from the destination.

Laxmi Chock: It was constructed especially for royal ladies was Viewed as the atrium of Goddess Lakshmi. . This Courtyard of Goddess Lakshmi is adorned with many flower plants and greenish lawns. A collection of paintings is displayed in the atrium.

Gulab Bagh: Gulab Bagh is the largest garden in Udaipur, Spread over an area of 0.40 sq km.It was built by Maharana Sajjan Singh in the 1850s.The garden is Situated in the south-east of the City Palace complex and derives its name from its abundance of rose species. Gulab Bagh also encompasses a museum, originally known as Victoria Hall Museum.

Saheliyon Ki Bari: This beautiful garden famous for its lush green lawns, marble art and fountains, Located on the banks of Fateh Sagar Lake built by Maharana Sangram Singh for the royal ladies in the 18th century. The garden is blessed with four water pools, museum, chiselled kiosks and marble elephants and fountains in the form of sculpted birds which spurt water from their beaks producing the rain effect.

Months from September to March make the ideal time to visit this city of lakes. If you want to enjoy Udaipur in its full glory, it would be better to plan your trip during the winters.

How to Reach Udaipur

By Air
Udaipur Airport namely Maharana Pratap Airport is located near Dabok at a distance of 22 kms from the city of Udaipur. Many domestic airlines connect the city to all the major cities of India including Jaipur, Mumbai, Delhi, Mumbai and Kolkata. Regular air services are available for Delhi and Mumbai.

By Rail
Rajasthan Railways connects Udaipur station with all the other cities of Rajasthan as well as India. There are frequent trains which run to and from Udaipur connecting Jaipur, Mumbai and Delhi. One can also travel to this beautiful city by the luxurious Palace on Wheels.

By Road
Udaipur is well connected by road to major cities in India. Brilliant road network ensure people to enjoy a relaxed journey to and from Udaipur. This mode of commuting is quite easy and economical. Udaipur Bus Stand has regular bus services, connecting Udaipur with nearby cities including Delhi, Jaipur, Chittorgarh, Indore, Kota, Ajmer, Ahmedabad and Mt. Abu.