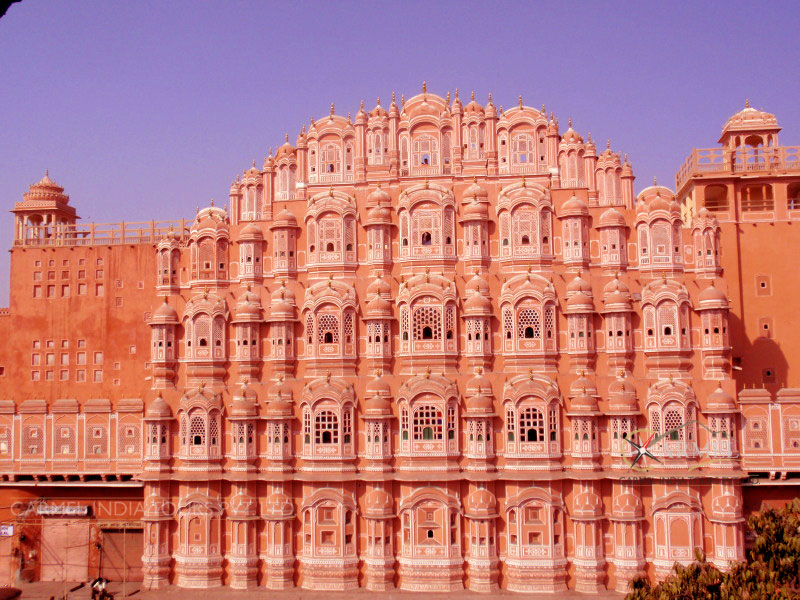 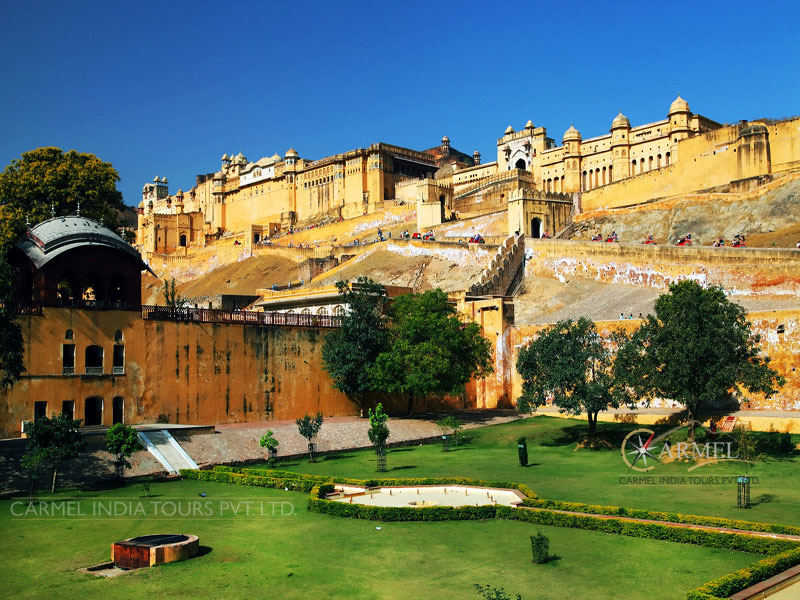 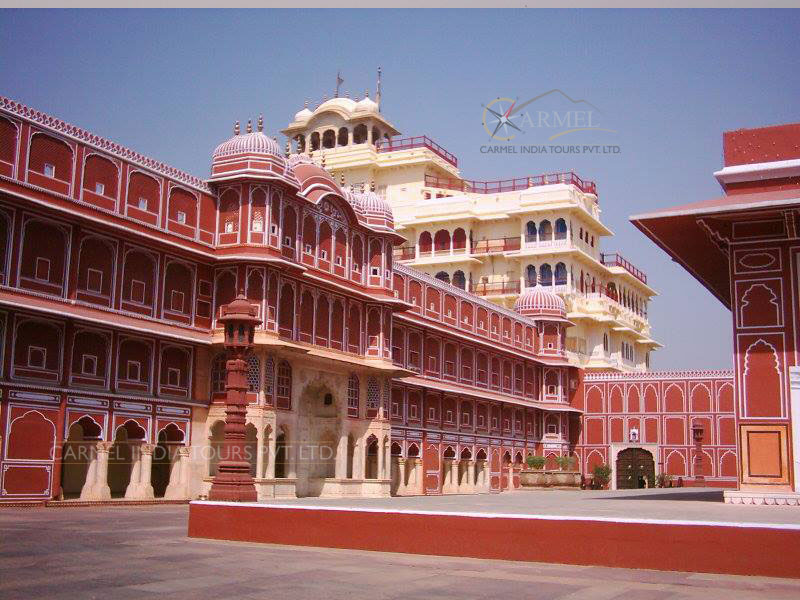 The fascinating city Jaipur is the largest city and the capital of the Indian state Rajasthan. Jaipur was established by Sawai Jai Singh in 1727, and was named after him. Jai Singh exhibited his various talents to develop this dream city under the guidance of an efficient architect, mathematician and astrologer himself Jai Singh consulted Vidyadhar Bhattacharya, a Brahmin scholar of Bengal. This was the first planned city according to the principles of Vastu Shastra. The city was built in the form of a rectangle divided into blocks (Chowkries) with broad roads and on both sides there are big buildings, with beautiful lattice work in the windows, which cannot even found anywhere else in India.

Jaipur dressed itself in Pink a hundred years after its completion in 1863, to welcome the consort of Queen Victoria, Prince Albert, since this is known as Pink City. In Rajasthani culture, pink stands for the colour of the host.

Around 43 years, Jai Singh ruled over this city and after his death Jaipur was attacked many time and captured by Maratha, Jath and British. After independent, Jaipur was merged with other princely states of Jodhpur, Jaisalmer and Bikaner. In 1956, Jaipur came into existence as the capital of Rajasthan, by this time, Jaipur had transformed into a city where the remnants of traditional royalty seamlessly blended with western culture.

This royal city Jaipur attracts national and international tourists for its rich cultural and architectural beauty, magnificent art and artefacts, the serene temples, the long standing forts and palaces, and beautiful royal havelis add on to the glory of Jaipur. Wonderful landscapes, marvellous flora and fauna, picturesque sunset view of this magic city is amazing which really wins the hearts of the peoples. Only forts and monuments aren?t the attractions of this city, the intricate handicraft items and exquisite jewellery also catch the eyeballs of tourists. The sunset view of this magic city is amazing.

Best Places to Visit in Jaipur

City Palace & Maharaja Sawai Man Singh II Museum:? City palace residence of the previous maharaja of Jaipur is a superb example of Rajputs and Mughal styles of architecture, built between 1729 and 1732 by Sawai Jai Singh in the heart of the old city area. The entire place is surrounded by a high wall and is divided into a series of courtyards, gardens and other buildings. It is also famous as Chandra Mahal.The outer courtyards have architectural like Mubarak Mahal, Sarvatobhadra, Diwan Khana and Pritam Niwas. These have been converted into a museum known as the Maharaja Sawai Man Singh II Museum.

Hawa Mahal:? Hawa Mahal or Palace of Winds was built by the king Sawai Pratap Singh in 1799,it was designed for the royal ladies to watch and enjoy the processions and and day to day activities from the cool confinement of this majestic facade. It is the most recognizable monument of Jaipur having five storeyed semi-octagonal structures have 953 inches and 152 windows, with overhanging latticed balconies, curvilinear roofs, domes and spires.

Jantar Mantar:? The astronomical Observatory was built in 18th century by Maharaja Sawai Jai Singh II, the huge masonry instruments were used to study the movement of the stars and planets and satellites, the correct timings of eclipses can be known from this planetarium?s 18 stone geometrical machines. The enthusiastic tourists should take guides with them.

JAL MAHAL or Water Place:? Jal Mahal palace was built during the 18th century by Sawai Madho Singh. It is a five-storey building is the finest example of Mughal and Rajasthani architectural styles located in the middle of the Mansagar Lake, looks like an iceberg. Originally it is constructed for serving the purpose of a summer resort for his family and guests. Travellers can spot a large number of migratory and native birds near this lake.It will provide a megnificant view at night when it is illuminated with light.

Lakshmi Narayan Birla Temple:? built in 1985 with 20 crores of rupees located on the sloppy hillside of Moti Doongri hill. Birla Temple is another great architectural wonder in Jaipur made by the pure marbles and furnished with many handicrafts shop and refreshing gardens inside the temple. This beautiful temple dedicated to Goddess Lakshmi and God Narayan.

Jaigarh Fort:? Known as the fort of victory is the most magnificent hilltop fort of the city built in 1726 by the king Sawai Maan Singh III and holds great appeal for military lovers. Jaigarh Fort is located on the top of the hill, by the name of Cheel ka Teela (Hill of Eagles). Jaigarh Fort is considered as one of the spectacular forts in India. It contains the world?s largest cannon on wheels. Jaigarh Fort is a perfect destination for a traveler, interested in the majestic past of India.

Nahargarh Fort:? Nahargarh Fort, also known as Tiger Fort was built 1734 to help defend the city. It was a sentinel of 600 ft height and situated on the hill top. It is a four storied fort with 2 floors below the earth. Nahargarh Fort, which stands as a symbol of the royal past and reminds the visitors of the glory of the former age that belonged to kings and Maharajas. It offers spectacular views of the Man Sagar Lake and the surrounding area.

Amber Fort:? Amer Fort is picqu breathtakingly situated at the forestry Aravalli hill, above the Maota Lake nearby Amer village, about 11 kilometres from Jaipur. This beautiful fort is one of the eye catchy pictures of Raputana royalty, wonderfully mixture of white marble and Redstone developed by the Maharaja Man singh.
There is an extremely beautiful structure built within the Amber Fort, the Amber Palace boasts with various spectacular historical monuments, such as the dazzling Seesh Mahal, Hall of Audience, Jai Mandir (Temple Of Victory), Mughal Garden? or ?Kesar Kyaari, Elephant Ride and Sukh Niwas Palace an innovative use of the natural water flow to recreate an air conditioning effect may be seen.

Birla Planetarium:? This is another great spectacular monument, which offers a unique audio-visual education about stars and entertainment with its modern computerised projection system. The most beautiful cinema hall is also located in Jaipur. The newest attraction of the city is the statue circle. The statue of founder Sawai Jai Singh has been erected in marble.

Samode:? The Samode palace was built by the Jaipur Maharaja Jai Singh II?s, boasts with splendid Shekhawati style paintings, and its 300 years old Durbar hall (Sheesh Mahal) and paintings of Dewan-i-khas . The walls, the ceiling are decorated with pictures and with magnificent lattice work.
After climbing 300 steps on the top of the palace is the fort. The Samode fort is located above the Palace atop a hill. It reflects royalty, luxury and elegance in plenty and it also offers spectacular view of the surroundings. The fort is built in Mughal style is the well laid garden Samode Bagh.Come to see colorful culture, villages and smiling people of Samode by camel safari.

Galta Temple:? It is 250 yrs old ancient temple dedicated to the Sun God is located near a spring from where the city looks enchantingly beautiful from hill top. The temples themselves are colorfully painted, with scenes from religious festivals lending to the ambience. The main attraction of the temple is the natural water spring. It is said that a holy dip in the spring is considered auspicious, especially on the occasion of Makar Sankranti.
Sisodia Rani Ka Bagh and Vidyadhar-ka-Bagh:-These two gardens in the gorge towards the east are designed in Mughal style with beautiful chatris (canopies), terraced gardens and fountains. Vidyadhar-Ka-Bagh Located near the Sisodia Gardens is a beautiful vineyard, which unfolds itself into the valley. Named after Vidyadhar Bhattacharya, this beautiful garden was built in honour of Jai Singh?s chief architect and town planner.

How to Reach Jaipur

By Air: The nearest airport to Jaipur is the Sanganer Airport in Jaipur, 10 km from the city. Domestic flights connect Jaipur with Delhi, Kolkata, Mumbai, Ahmedabad, Jodhpur and Udaipur.
By Train: Jaipur is well connected by trains to all the major cities of Rajasthan and India such as Delhi, Agra, Chennai, Jodhpur, Mumbai, Udaipur, Bikaner and Ahmedabad.
By Road: A well-developed network of road connects Jaipur to important tourist towns of Rajasthan and north India. There are private as well as government buses that connect Jaipur to all the nearby major cities such as Delhi and Agra.