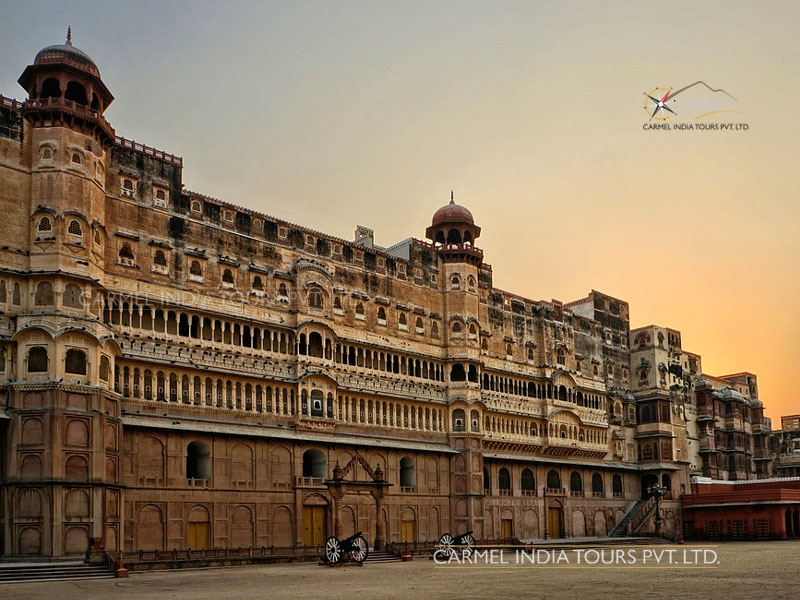 Bikaner, the evergreen beauty of desert, is situated in the northwest region of the desert state Rajasthan. This city, also known as the camel country, the city is renowned for the best riding camels in the world. The ship of the desert , camels are used as helpers in a number of works such as pulling carts, transportation of goods, and much more. Bikaner is filled with many sand dunes. Another attraction of the city and an important source of water are the well of Bikaner, constructed on each of the Four Corners and can be noticed even from a distance.

Bikaner was founded as a barren land known as ?Jangladesh? however, Rao Bikaji, a Rathore Prince and the founder of this city, transformed it to an impressive city (called Bikaji after the Founder?s Name) in a short span of time, and established it as the city of Bikaner in 1488 AD. The kingdom of Bikaner maintained good relations with the Mughals.The end of Mughal rule, began the British Rule in the city, and this British rule ended with the downfall of the British Empire in the country. The rule of the valiant princes in the city ended when the princely state become a part of the Union of India. After independence of India Bikaner was made a part of the state of Rajasthan. Bikaner was also the first kingdom in the desert state of Rajasthan introduce electricity in the year 1866.

At present Bikaner is an excellent India holiday destination. The exotic camel safaris, it's gorgeous forts, the imposing palaces, beautiful and richly sculptured temples of red and yellow sand stones which display some of the finest creations of Rajput civilization and the worship of thousands of holy rats at Karni Mata temple are some of the most interesting aspects of Bikaner. Tourists can feel the actual colour of the place in the month of January when the camel festival of Bikaner held.

Best Places to Visit in Bikaner

Junagarh fort
Junagarh fort was built by Maharaja Rai Singh; it is one of the most attractive forts in Bikaner. The fort is completely built with red sandstone brought from the Thar Desert. There are many wonderful things to see within the fort like Ganga Mahal, Phool Mahal, Badal Mahal, etc.

Lalgarh Palace
Lalgarh place in Bikaner is a treat for the eyes, it was built in the year 1902, this palace was constructed by Maharaja Ganga Singh in memory of his father Maharaja Lal Singh. The Lalgarh palace it is a three storeyed building which is coated completely with red sandstone and this makes the palace look more appealing. Currently, the palace comprises of a museum, a heritage hotel and a luxury hotel.

Karni Mata Temple
Karni Mata Temple was built by Maharaja Ganga Singh, and an overhead mesh that protect rats from birds. The 600 years old temple is home to thousands of black, grey and white rats or Kaba. It is believed the Goddess Durga lived at this place during 14th century and performed miracles. According to the belief of followers, the rats would reincarnate as holy men. It is believed that feeding rats at this temple brings good fortune.

Jain Temple
Jain Temple was built by a rich businessman called Bhanda Shah, dedicated to the 6th lord of Jainism. It is located near the Laxminath temple, which is one of the oldest temples of Bikaner. It is believed that the temple was built using more than 40 barrels of ghee instead of mortar. The entire temple building is divided into three floors and is made of red sandstone and white marble.

Laxmi Nath Temple
Laxmi Nath temple was found in the year 1488 AD. It is the oldest of all temples in Bikaner. Vishnu and Lakshmi are worshipped in this temple.God received the devotion of a number of devotees from different parts of the world. This temple is the best example of architecture and this reflects the skills of artisans during those ages.

Ganga Singh Museum
The museum was established by former ruler of Bikaner, Maharaja Ganga Singh in 1937. Highlights of the gallery are the gilded golf leaf paintings on camel hides of Usta craftsmen, Paintings, art and craft, terracotta, pottery, carpets, coins and ancient Rajput weaponry are displayed in separate sections in the museum.

Jain Haveli
Jain Haveli is a breathtaking palaces and a symbol of pride for the state of Rajasthan. The Jain havelis belonged to the rich and the wealthy merchants of Rajasthan, A palatial house surrounded by a courtyard, standing tall amidst narrow lanes built with red sand stone ? havelis take one back to the past of kings and queens.

Kote Gate
The local market of Kote Gate is a paradise of shopping for the tourists who visit in Bikaner. Being a part of history, it includes several handicrafts and items of different art forms, items made of camel?s hide, miniature paintings, wood carvings, khadi items along with mouth watering food items.

In summer (March to June) the maximum temperature soaring to 47 °C, while the minimum is nearly 28 °C. Winters (December to February) are chilly with minimum touches nearly 4 °C.

Best Time to Visit Bikaner
The peak tourist season is from October to March when the weather is pleasant and quite cooler than rest of the year. This is an ideal time for any traveller to see the forts, palaces and other sightseeing options in the city.

How to Reach Bikaner

By Air
Jodhpur Airport is the airport nearest to Bikaner which is 251 kilometres away from the city. Some of the Indian cities which have a direct flight from Jodhpur Airport are Delhi, Bengaluru, Kolkata, Hyderabad, Lucknow, Mumbai, Pune, Goa, Indore, Guwahati, Ahmedabad, Jammu, Chennai and others.

By Train
The city has two railway stations, namely, Bikaner Junction and Lalgarh Railway Station. From here you can take trains to various destinations such as Delhi, Jaipur, Jodhpur and many more.

Bikaner is well-connected by a network of roads which makes your road trip comfortable. Plenty of bus services are available from Bikaner to Delhi, Jodhpur, Agra, Ajmer, Ahmedabad, Jaipur, Jhunjhunu, Jaisalmer, Barmer, Udaipur and Kota etc.