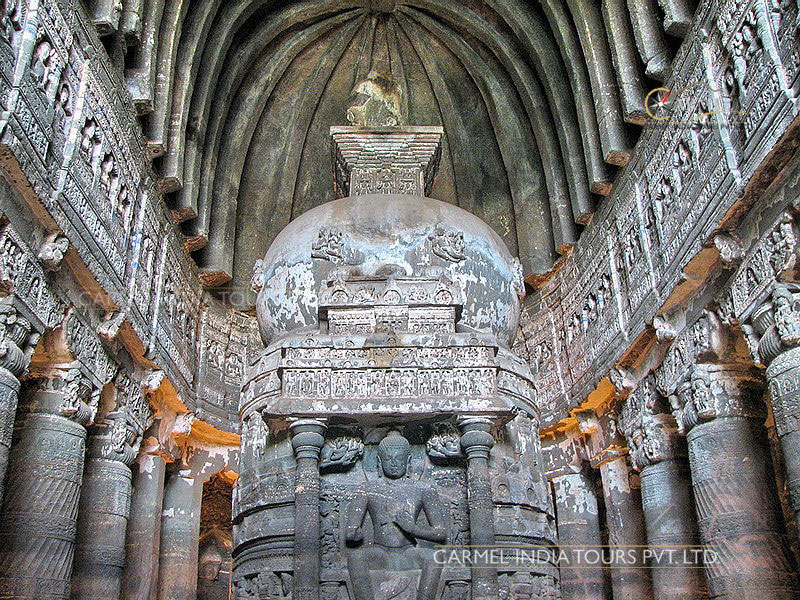 Aurangabad, one of the fastest growing cities in the world, situated in the Aurangabad district of Maharashtra, India. This city is also known as the 'City of Gates' and also declared as Tourism Capital of Maharashtra. Aurangabad is the home to an amazing sights, activities and events and can give the quick view of the real India. The historical city is a combination of old world charm with a modern and vibrant night life.

The city changes its names according to the time and rulers. The history of Aurangabad can be traced back to 1610; a prime minister of the Muslim Kingdom of Ahmednagar, Malik Ambar established a town at a village called Khirki. In 1626, his son Fateh Khan changed the name of Khadki to Fatehnagar. In 1653 when Prince Aurangzeb was appointed the viceroy of the Deccan for the second time, he made Fatehnagar his capital and renamed it Aurangabad (meaning 'Built by the Throne'), after the death of Aurangazeb in 1707 it was taken over by the Nizam of Hyderabad. After independence of India, in 1960 it became a part of Maharashtra state.

Today, Aurangabad is the most iconic travel destinations of India. It offers a wonderful opportunity to step back to past history with many historical monuments, including the Ajanta Caves and Ellora Caves, which are UNESCO World Heritage Sites.

Best Places to Visit in Aurangabad

Ajanta Caves
The Ajanta Caves showcase the Buddhist stories of the period between 200 B.C. and 650 A.D. This group of caves was discovered by few British Officers, who went for a tiger hunt in the site. There are 29 caves in Ajanta, constructed by some Buddhist monks, using tools like chisel and hammer.

Bibi Ka Maqbara
It is built in the memory of Begum Rabia Durani, by her son Prince Azam Shah; Bibi-ka-Maqbara is a complete replica of Taj Mahal. It is an excellent example of the Percian Architecture.

Ellora Caves
The Ellora Caves were built during the period of 350 AD to 700 AD. It presents structures with the three faiths of Hinduism, Jainism and Buddhism. The 34 caves of Ellora are situated at a distance of 29 km from Aurangabad.The 17 caves in the middle are devoted to the Hinduism, the 12 caves found in the south are dedicated to the Buddhist and the 5 caves located in the north are Jain.

Daulatabad Fort
Daulatbad formerly known as Devgiri or 'the city of fortune' was named by the Delhi Sultan Muhammad Tughlaq. 13 km away from Aurangabad this fort is known to be the oldest existing forts of India. The fortress displays a strong wall of 5 km and a series of ramparts.

Jain Temple
The Jain temple is located at Kachner village, near Aurangabad this place is famous for the Chintamani Parshvanath installed inside the temple. This beautiful idol was discovered at an underground basement around 250 years ago. It is believed that the idol has some miraculous powers that can solve the problems of the people who seek divine intervention of the deity.

Panchakki
The Panchakki Water Mill was used for grain grinding stones. It was built in the early years of the 17th century by Baba Shah Musafir. Panchakki is one of the few places that are calm and peaceful in Aurangabad which helps to visualize the life that existed during the medieval period in India. Panchakki also has a tomb of Baba Shah Muzaffar, who was a Sufi Saint and was the spiritual adviser to Aurangzeb.

Himroo Factory
A glimpse of conventional type of Himroo Weaving is an amazing mix of cotton and silk and it is known for its quality, can be seen at the Himroo factory .The designs and the patterns on these fabrics are the inspirations which are derived from the Ajanta paintings. The factory is near Zaffar Gate in the old town.

Khuldabad
Khuldabad is a historical city that lies at a distance of about 27 km from Aurangabad. Khuldabad is popularly known as the Valley of Saints or Heavenly Abode as many Sufi saints chose to live and die here in the 14th century. Along with the tombs of the Sufi saints Zar Zari Zar Baksh, Shaikh Burhan-ud-din Gharib Chisti and Syed Shah Zain-ud-din Shirazi, the tomb of the Mughal emperor Aurangzeb and some of his aides and family members are also found in this town.

Chand Minar
Chand Minar in Daulatabad, is an outstanding example of Islamic art. Ala-ud-din Bahmani built this minaret in 1445 to celebrate his occupation of the area. The tower is 210 feet in height and 70 feet in circumference at the base. Beautiful Persian tiles cover it.

Aurangabad generally offers moderate temperature with low humidity. Summers (March to May) are hot with the average temperature ranging between 37 °C and 21 °C and with the maximum soaring to around 43 °C. Monsoons (June to September) provide relief to the hot climate and most of the rainfalls occur in this season. Winters (November to February) provide very pleasant climate with minimum touching only down to 10 °C.

How to Reach Aurangabad

By Air
Aurangabad Airport, Chikalthana Airport, is 10 km away from the city centre and is well linked with other major cities in India. Regular air services to Jaipur, Udaipur, Jodhpur, Mumbai and Delhi are available from Aurangabad. During the holiday season, Indian airlines connects Pune and Mumbai to Aurangabad.
By Train
Aurangabad is well connected to other major cities of the country via regular trains.Railway Stations: aurangabad (AWB), rotegaon (RGO), chikalthan (CTH), mukundwadi halt (MKDD).

By Bus
Aurangabad is well connected to all the major towns in the state. State owned public transports buses are available at cheap fare. Overnight luxury buses are running between Mumbai and Aurangabad. Famous Ellora town is connected to Aurangabad by bus services from many cities in Maharashtra.