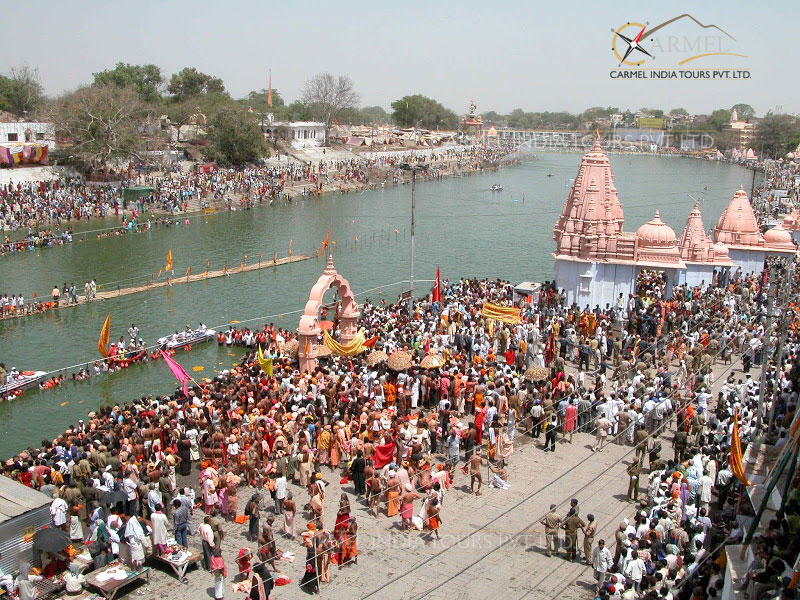 Ujjain, one of the ancient cities of India situated on the eastern bank of the River Shipra, in the Malwa region of Madhya Pradesh. Ujjain is one of the seven holy places to acquire Moksha, its also host to the Kumbh Mela held after every 12 years.

The history of Ujjain is associated with many mythological legends, according to one, the origin of the city is the result of Sagar Manthan, as the God and Devils churned the ocean in the search of immortal nectar (Amrit). The story started when the nectar was discovered, and a struggle started between the God and the demons for the attainment of immortality. In the process, some drops of the Nectar fell on Earth, where the Ujjain city is located. Ujjain is the place where The Great Ruler Ashoka Turned into a Buddhist and also constructed stupas in Ujjain and Sanchi. Ujjain is also the place where, Lord Krishna, with Balarama and Sudama obtained their education from Maharshi Sandipani.

Today, this city attracts a great deal of Hindu pilgrims and tourist from around the country, to take a holy dip in the waters of the River Shipra. It is also home of one of the twelve Jyotirlinga shrines to the god Shiva, the Mahakaleshwar Jyotirlinga. The Kumbh Melas also takes place here in every twelve years, in the month of Chaitra.

Best Places to Visit in Ujjain

Mahakeleshwara Temple
This temple of Lord Shiva is devoted to one of the twelve Jyotirlingas in India. The temple is built in five levels and decorated with idols of deities like Omkareshwars Shiva, Parvati, Ganesh, Kartikeya and Shiva's Bull - Nandi.

Kal Bhairava
The most important among the eight bhairavas of the Shaivites is situated on the bank of River Shipra at Ujjain. The temple, decorated with paintings in Malwa style, is the centre of attraction.

Jantar Mantar
Another place of astronomical importance and for star gazers is the Jantar Mantar. Ujjain was the center of the studies and research of Hindu astrologers and astronomers and the observatory is evidence of the same. Jantar Mantar is derived from the words, Yantra and Mantra.

Chintaman Ganesh Temple
The ancient temple of Chintaman Ganesh has an idol of Ganesh with Siddhi and Riddhi. The deity here is addressed as Chintaharan Ganesh, which means "the assurer of freedom from worldly anxieties".

Mangalnath
The temple of Mangalnath is located away from the city of Ujjain and is accessible through a winding road. The temple overlooks a vast expanse of the Shipra River.

Harsiddhi Temple
The Harsiddhi Temple occupies a prominent place in the galaxy of age-old sacred locations of Ujjain. The two pillars supporting the temple are decorated with lamps and special features of Maratha art. There is also an ancient well on the temple premises.

Gopal Temple
The Gopal Mandir is situated in the heart of the big market square. The temple stands as a specimen of Maratha architecture. The chamber of the goddess is decorated with marble and the doors are silver-plated.

Gomti Kund
It is said that Lord Krishna bade the holy rivers from all over the pilgrimage centers for his aged Guru to carry out his rituals easily. Till date, it remains a constant source of water supply to the Sandipani Ashram.

Ujjain experiences extreme climatic conditions of very hot summers and chilly cold winters. The summer months (March - June) are ruthless with temperatures soar up to a maximum level of 45°C. The winter months during November to February are pleasant and cool in daytime with maximum temperatures of about 20°C. Nights become chilly with a minimum of 3°C. Monsoons during June to September offer moderate rainfalls.

Best time to visit Ujjain:
Best period to visit Ujjain is from October to March. Simhastha is the great bathing festival of Ujjain, which is celebrated once in twelve years. Ceremonial bathing in the holy waters of Shipra begin with the full moon day of Chaitra (March) and continue up to the next full moon day.

How to Reach Ujjain

By Air
Devi Ahilyabai Holkar Airport in Indore is the nearest airport to Ujjain, which is situated 55 km away. Indore is air connected to major cities in India by public and private domestic airlines. Indore is connected to places like Jaipur, Mumbai, Delhi, Bangalore, Bhopal and Chennai.