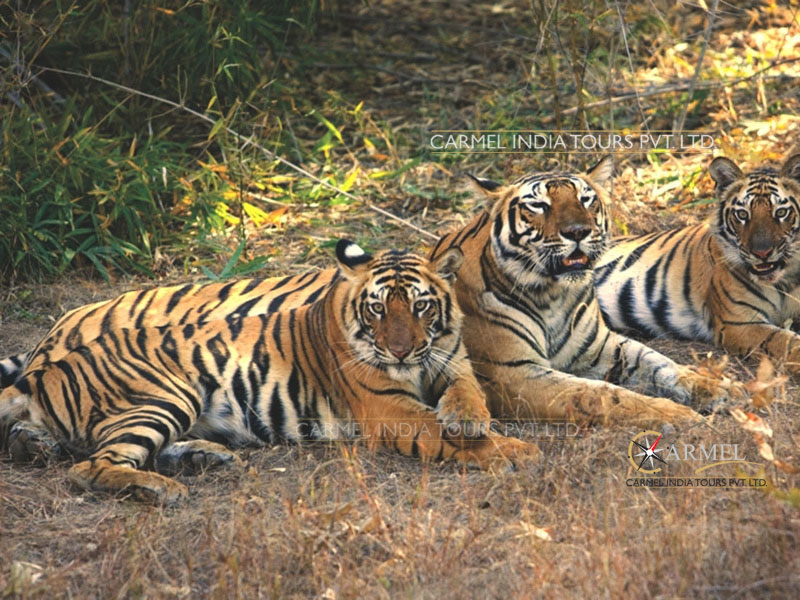 Bandhavgarh is a historical place and the name of bandhavgarh means the brother fort, ?Bandhav? in English means the brother and Garh means the fort, as lord Rama has gifted the amazing Bandhavgarh fort to his loving brother lord lakshmana. There are the written proofs in Bandhavgarh fort of the bharihas and vakatak dynasties who ruled over the land, some other dynasties which ruled the bandhavgarh area were the Sengars, the kalchuris and the Baghels. Out of all the Baghels rule the regions for the longer period and during their rule in 1618 AD, the baghels decided to shift their capital to Rewa. This place has been the hunting point for the Maharajas of Rewa, the place was also declared a game reserve where only the royal families were allowed for hunting due to the presence of thick forest and then into the habitat of the wild beasts (the tigers). Maharaja Martand Singh of Rewa captured the first white tiger in this region in 1951. Till independence, the entire region was the private property of the Maharaja who finally handed over the land to the state government and it declared as the national park in 1968.

Today, Bandhavgarh is recognized as the tiger reserve, the park also has a large breeding residence of leopards, and diverse species of deer. It is a paradise for wildlife lovers and tourist can also enjoy the several man made caves with some written proofs and rock paintings in Bandhavgarh.

Best Places to Visit in Bandhavgarh

Bandhavgarh Fort
Bandhavgarh Fort, believed to be around 2,000 years old, is located atop the Bandhavgarh Hill, in the centre of the national park. Surrounded by a large number of smaller hills separated by gently sloping valleys, the fort is home to many endangered species of vultures.

Elephant Safari
As a part of elephant safari offered in the park, tourists can view a tiger from the elephant back.

Bandhavgarh Hill
Located at the centre of the park, the hills are surrounded by sloping valleys, which end in small, swampy meadows locally known as ?bohera?. Highest in the reserve, the hill is surrounded by 32 small hillocks, which together form a number of low lying plains and valleys.

Chakradhara
Chakradhara is another place in the Bandhavgarh National Park, which is famous for tiger sighting. Surrounded by dense hilly regions, this large meadow area is home to different species of fauna and flora. This place resembles an open hunting area, having a density of wild animals.

Tala Village
Tala Village is one of the most beautiful attractions of Bandhavgarh, and is the lowest point of the wildlife reserve. It has many mud houses and abounds with natural landscapes.

Sita Mandap
Sita Mandap resembles the wedding ground of the wife of Lord Rama, it also looks similar to this rock arch.

Bhamera Dam
Bhamera Dam is located around 20 km away from Bandhavgarh National Park in Panpatha Sanctuary. A favourite with birdwatchers, the dam is visited by several avifaunas.

Gharpuri Dam
Gharpuri Dam is also visited by several water birds. This beautiful place is situated around 10 km away from Bandhavgarh National Park.

Shesh Shaiya
Shesh Shaiya, an idol of Lord Vishnu, is the originating point of River Charanganga. Having a length of 65 ft, it is laid horizontally on the serpent, which has seven heads and is considered very old in terms of architecture.

Bandhavgarh offers cool, pleasant climate in winter and has hot summers. Summers (March to May) are very dry and scorching with hot sun and maximum temperature touching above 45 °C and sometimes soaring up to 48 °C. Monsoons (June to November) are accompanied with heavy showers and the Park thrives during the monsoons with fresh greeneries. Winters (December to February) are the pleasant season with cool climate all through.

How to Reach Bandhavgarh

By Train
Nearest railway station is Umaria, which is about 32 km away from the city. Umaria has a huge rail network link and connected to all major railway junctions including Delhi (Durg Jat Sf Exp), Bhopal (Bsp Bpl Pas), Vishakhapatnam (Hirakund Exp (Hirakund Exp) and Agra (Utkal Express).
By Air
Nearest airport is Jabalpur, which is about 200 km away from Bandhavgarh. Jabalpur airport is connected to Delhi and Bhopal. International tourists have to take connecting flights from Delhi.
By Bus
State owned buses connect to Bandhvagarh from other major cities in the state. Bus services are available from Umaria (32 km) and Gwalior (565 km).