Deccan Odyssey Jewels of the Deccan 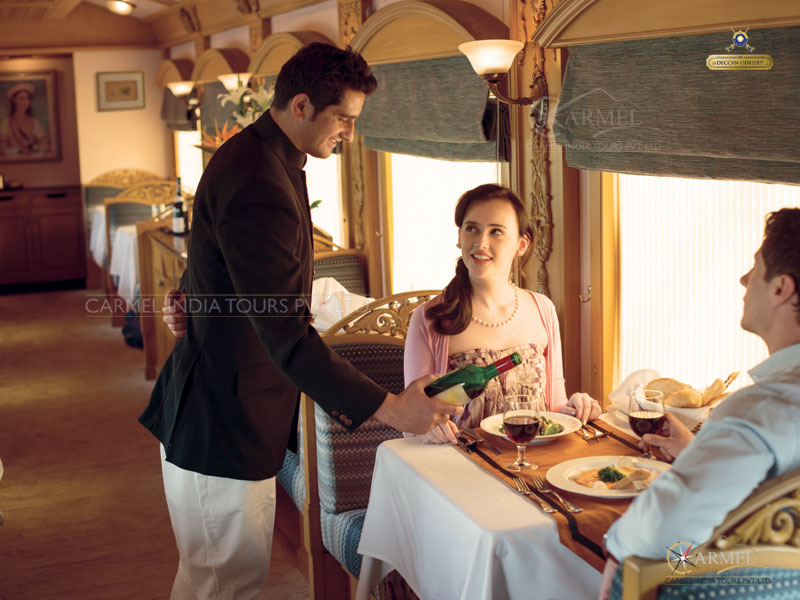 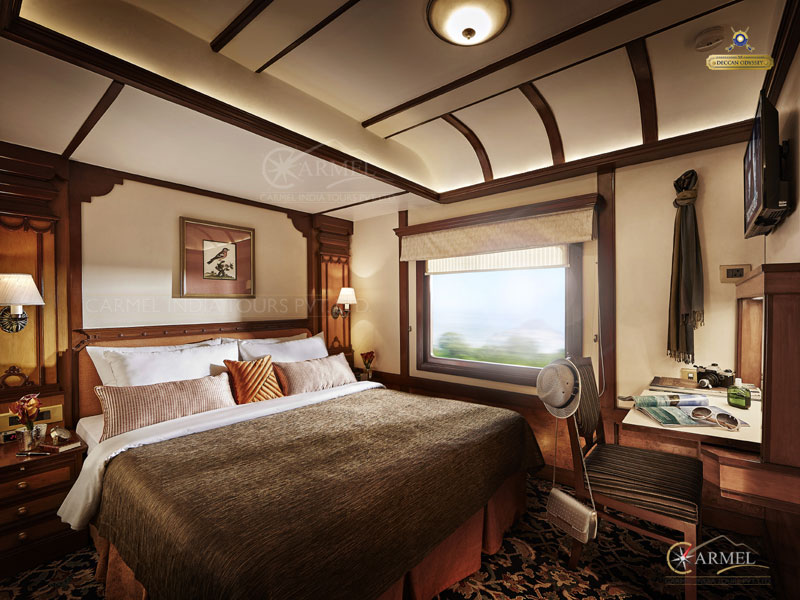 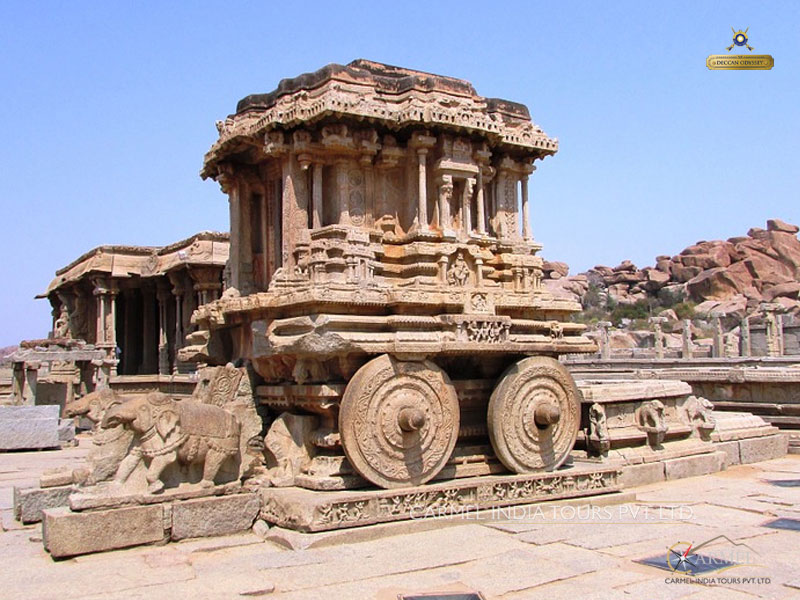 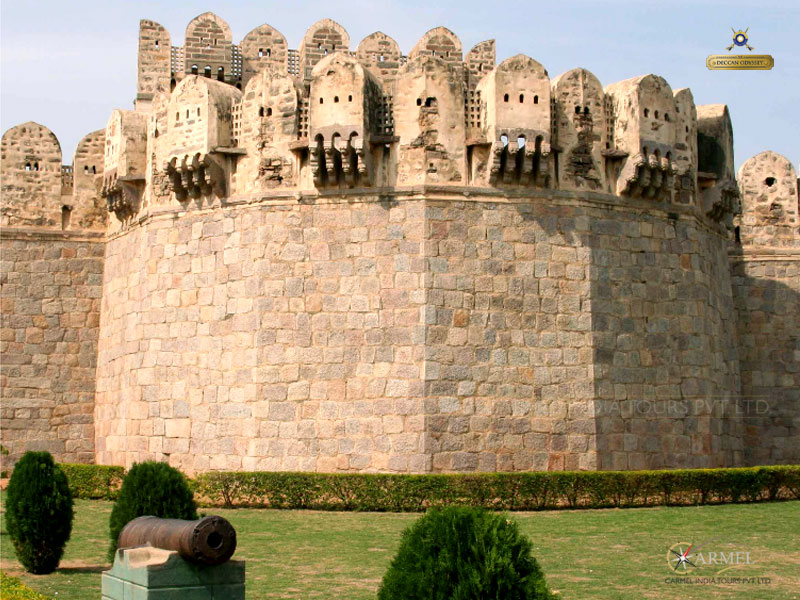 Deccan Odyssey Jewels of the Deccan

Welcome to Jewels of the Deccan, an 8-day journey through India’s Deccan plateau on India’s premier luxury train, the Deccan Odyssey, that takes you through tales and architectural wonders of the Adil Shahi dynasty of Bijapur to the Chalukyan in Aihole & Pattadakal, onto the powerful Vijayanagara kingdom in Hampi ; to the contrasting styles of the Qutb Shahi dynasty of Golconda and the Asaf Jahi, established later in Hyderabad and finally visits to some of the most prominent & unexplored destinations of west-central India, with a trip to the unrivaled Ajanta & Ellora Caves. Sprinkled among these stories and fables, are visits to quaint little towns famed for hand operated looms that weave vast quantities of beautiful fabric, and samplings of some of the best Dakkhani cuisine to be had. A railroad journey like none other, in a land like no other, we welcome you on board the Deccan Odyssey.

Day 1 Saturday: Board the Deccan Odyssey at Mumbai – on to Bijapur

Welcome aboard the Deccan Odyssey.

Early this evening assemble at the Chhatrapati Shivaji Terminus at approximately 1530 hours to complete the registration process and check in formalities for your Jewels of the Deccan journey, as you receive a traditional Indian welcome and enjoy a refreshing welcome drink. After completion of all formalities, you will be shown to your delightful cabins. As you settle in, the Deccan Odyssey shall depart Mumbai for Bijapur in Karnataka. Dinner on board & overnight on Deccan Odyssey.

Relish breakfast this morning as the Deccan Odyssey arrives at Bijapur, the historic capital of the Sultans of Deccan. Established between the 10th and 11th centuries by the Kalyani Chalukyas, Bijapur changed hands often, passing into the hands of new conquerors and invaders. In the second half of 16th and early 17th century, under the aegis of the Adil Shahi dynasty, their capital city of Bijapur occupied a prominent place among the celebrated cities of India and even surpassed great cities of Delhi, Agra and Mughal India. Due to the secular nature and liberal patronage of the Adil Shahi Sultans, many scholars, poets, painters, dancers, calligraphers, musicians, Sufi saints and other men of arts flocked to Bijapur which also came to be known as the 'Palmyra of the Deccan' Post breakfast, first head to the Gol Gumbaz, literally ‘round dome’, the second largest tomb in the world. The mausoleum of Adil Shah, the Sultan of Bijapur, it is a structural triumph of Deccan architecture, with a circular gallery where the tiniest of whispers gets magnified owing to the unique acoustics of the dome.

Next, head to the Jumma Masjid, known as one of the first mosques in India and then onto Malik-e-Maidan, the largest medieval cannon in the world. Don't hesitate to make a wish here as legend has it that if you touch the gun and make a wish, it will come true!
Visit Mehtar Mahal, a 17th century ornamental gateway to a mosque. Then, drive to and explore Ibrahim Rouza, considered amongst the most elegant Islamic monuments in India; its 24m high minarets said to have inspired those of the Taj Mahal.

Rise early this morning, and after breakfast head out to explore the temples and ancient settlements of Aihole and Pattadakal, one of the world's largest temple complexes. Aihole, is often called the cradle of Indian architecture. Explore a few of the over 70 rock cut temples constructed by the Chalukyan kings in a completely experimental style, with each temple different from the others in the complex and even from other temples in India itself. Continue on to Pattadakal situated on the banks of the Malaprabha River and explore the architectural style here which combines South Indian (Dravidian) and North Indian (Nagara) forms. In fact this architecture can be seen to have influenced later architecture commissioned by the Hoysala and other dynasties.

For lunch, head back to the Deccan Odyssey, post lunch, you can choose an optional tour to the lovely weaving village of Guledgud, famous for its hand and power looms of ilkal and khann. Observe the process of weaving and head to an outlet where you can pick up lovely souvenirs to carry back home. OR visit the rock cut caves and sculptured temples in Badami. Head back to the Deccan Odyssey for dinner as it makes its way to Hampi. Breakfast, Lunch and Dinner on board. Overnight on Deccan Odyssey.

This morning as you enjoy breakfast, the Deccan Odyssey rolls into Hospet. Today you will visit the iconic City of Victory - Hampi, a World Heritage site, famous for its splendid architecture, sculptures and their historical significance. A short drive quickly changes your landscape from the city bustle to sentient massive boulders as you reach Hampi. Stop at the Narasimha statue and spend some time taking pictures and looking around. Next head to the mustard Ganesh, located at the base of the Hemkuta hills, and quite a misnomer as the elephant God statue here is anything but small! Take in the breathtaking vistas around the hills with their little caves and alcoves. Walk the banks of
the Tungabhadra River as you leave the Virupaksha temple on to the famed Vittala temple, the polar power sites of Hampi, one a living temple, the other a most extravagant architectural showpiece.

Head back to Hospet for lunch on board the Deccan Odyssey. Post lunch, disembark once more to continue your exploration, reaching the Royal Center at Hampi. This area was the citadel of the Vijayanagara kings and encompasses courtly and military structures. Visit the Queens Bath, the Stepped Tank, the Mahanavami Dibba or great platform, where a ramp is available to reach its summit, the Hazararama Temple, the Queens Enclosure with its Lotus Mahal and the Elephant stables.

After a full day of visiting the wonders of Hampi, return to the Hospet station. Board the Deccan Odyssey for your onward journey to Hyderabad as you sit down at dinner. Breakfast , Lunch and Dinner on board & overnight on Deccan Odyssey.

This morning the Deccan Odyssey rolls into royal city of the Nizams, Hyderabad. Legends abound over how this capital of the Asaf Jahi dynasty came to be called Hyderabad. One of the more interesting ones is that it was named after Bhagmati, the Hindu wife of Muhammad Quli Qutb Shah, who converted to Islam and changed her name to Hyder Mahal.

After an early breakfast this morning, disembark and drive towards the epitome of Nizami culture and grandeur, Golconda. Originally a mud fort, it soon acquired impressive proportions after becoming the seat of power of the Qutub Shahi dynasty. Return to the Deccan Odyssey for lunch and a little rest. Alternately, you could also choose to take an optional shopping tour. Hyderabad is a city known for its pearls, lac bangles and custom made oil based fragrances or “ittars” amongst other specials. Spend your morning shopping and follow it up with lunch comprising the famed Hyderabadi Biryani. Continue on to Falaknuma Palace, the name means “like the sky”, as it stands tall, reaching for the clouds. Take a tour of this beautiful palace followed by a sumptuous high tea. Thereafter explore the old city area of Charminar and its bustling bazaars. Standing tall in the centre of the city, Charminar is a global icon for Hyderabad and one of the most recognized structures of India. It was ostensibly built there by Muhammad Quli Qutb Shah to fulfill his vow of building a mosque if the plague epidemic  ravaging the city ceased. It is interesting to walk through and shop in the markets in the Charminar area, a busy bustling area. Walk through Laad Bazaar for the local jewellery, especially exquisite bangles, and to Pather Gatti for the famous Deccan pearls. Return to the Deccan Odyssey for dinner and a restful evening as Deccan Odyssey departs Hyderabad for Aurangabad.

Breakfast, Lunch & Dinner on board; High tea at the Falaknuma Palace & overnight on Deccan Odyssey.

Aurangabad, named after the last Great Mughal Aurangzeb, is an industrial town in Maharashtra and the stop from where to head out to visit the exceptional Ellora Caves, a World Heritage site. The city itself has deep Mughal influences and there are several monuments of note here; the Daulatabad Fort, Bibi-ka-Makbara and the city’s 52 gates, each with its own history, amongst them. As you enjoy lunch, the Deccan Odyssey arrives at Aurangabad, from where a scenic drive takes you to the Ellora Caves, carved into the side of a basaltic hill 30 km from the city. The finest specimen of cave-temple architecture in India, the site encompasses 34 rock-cut shrines representing Buddhist, Jain and Hindu art dating from the 4th to 5th century AD. The 12 caves to the south are Buddhist, the 17 in the centre are Hindu, and the 5 caves to the north are Jain. The most remarkable is the Kailash temple, meant to be a replica of Shiva’s celestial abode on Mt. Kailash. It is the best example of rock cut architecture and an engineering marvel.

Time at leisure on board as the hinterland of Maharashtra sweeps past, with its ever-changing colors and landscape. In the evening, sit back, unwind and enjoy cocktails fixed by our bartender onboard, followed by a sumptuous dinner and a welldeserved rest as the Deccan Odyssey proceeds towards Jalgaon to visit the exquisite Ajanta Caves.

Breakfast, Lunch & Dinner on board &  Overnight on Deccan Odyssey.

The Deccan Odyssey arrives at the Jalgaon station this morning from where, after breakfast on board, you will disembark and drive to the Ajanta Caves, another World Heritage site and an architectural marvel of its time. The 30 rock-hewn Buddhist caves at Ajanta have been masterfully carved and are adorned with sculptures and paintings of Buddhist religious art, depicting universal pictorial art and are known to depict the fusion between Buddhist and Hindu faith.

Lunch will be on board the Deccan Odyssey. Rest of the time at leisure. In the evening watch the tapestry of rural India unfold as you sip a sun downer before dinner as Deccan Odyssey pulls into its last leg of journey to Mumbai. Breakfast, Lunch & Dinner on board & overnight on Deccan Odyssey.

Early this morning, after breakfast, you will disembark at Chhatrapati Shivaji Terminus, Mumbai. Bid farewell to the Deccan Odyssey as your royal passage through the grand vistas of India comes to an end. Breakfast on board