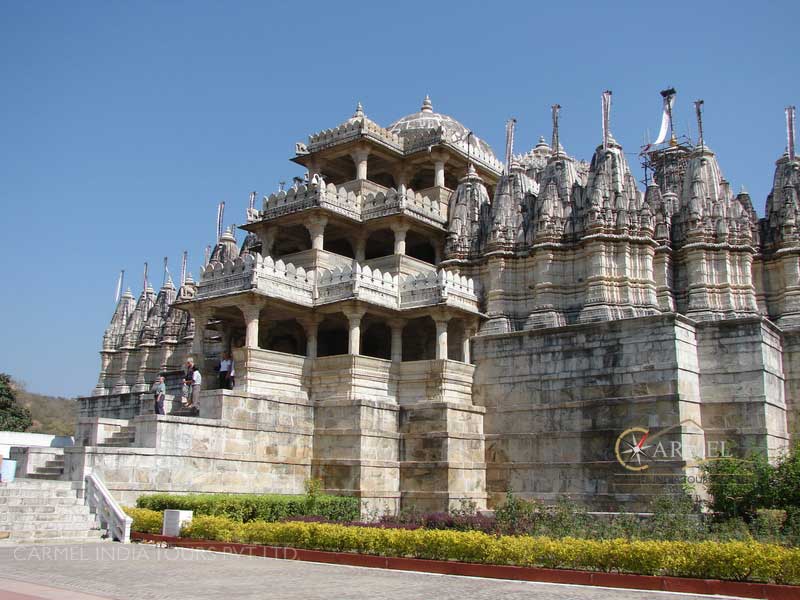 Ranakpur is a village located in the mountain ranges of Pali district, of Rajasthan in western India. The winding Maghai River and the majestic Aravali hills provide heart capturing views to Ranakpur. This beautiful village is lies between the lush green valleys and beautiful streams and gives a chance to enjoy lovely and interesting sights.Ranakpur is also known as the 'temple town of Rajasthan' as the Jain temple at this place is a slice of paradise on the earth, thus the city is considered a holy land for the Janis.

Ranakpur gets its name after Rana Kumbha, the king of Mewar (during the 15th century), granted Dharna Sha a businessman land to build the famed Jain temples in the city.According to legends, it is believed that, a Devi appeared in Dharnasha?s dreams and showed him the Nalinigulm Vimana (heavenly aircraft) a divine vehicle of the twelfth heaven. From that day Dharnasha want to build a temple in the shape of that Viman, finally he built the Jain Temple under the reign of Rana Kumbha. Constructions of the Jain temple began in the late 14th Century and it is the complexity of the temple structure that it took around sixty five years of careful construction. This temple is wholly constructed in light colored marble and basement of this colossal temple is spread over 48000 sq. ft. The main chamber have four entrances where the idol of Adinath is placed, there are five pillars in the temple by holding the idols of various Tirthankaras.
The breathtaking and marvelous architecture of the Ranakpur temple is undoubtedly praiseworthy and the sheer beauty of the temples mesmerise the visitors.the temple was also nominated amongst the top 77 wonders of the World.

Best Places to Visit in Ranakpur

Ranakpur Jain Temple
The most popular of the Jain temples present in the place includes the Chaumukha Temple, it is the city?s major tourist attraction. The two huge bells weighing 108 kgs each add to the temple?s allure.Ranakpur is one of the five most important Jain pilgrimage sites of India.

Narlai
Narlai is a small village situated on the base of a hill and is mainly popular for having some significant Hindu and Jain temples, situated at a distance of 6 km from the town of Ranakpur. Narlai is the home to several ?baoris? or steep wells, One of the Jain temples present here is dedicated to Lord Adinath, who is the first Jain Tirthankara.

Sadri
The town of Sadri is famous for its group of temples, along with an old Dargah of Khudabaksh Baba and situated at 8 km from the city of Ranakpur.

Surya Narayan Temple
The Surya Narayan Temple is dedicated to Sun God. It also provides a sight of the Lord Surya driven chariot, having seven horses. This temples is famous for its innumerable wall projections of circular structure.

Muchhal Mahavir Temple
The main feature of Muchhal Mahavir Temple is the statue of Lord Mahavir with a moustache.It is situated in the Kumbhalgarh Sanctuary, at a distance of 5 km from the Ghanerao Village. It also comprises two statues of elephants at the gateway, in guarding postures.

Best time to visit
While visiting Ranakpur, make sure that you plan your trip during the winter season because this is the best time to visit the place (October to March).

How to Reach Ranakpur

By Air:
The pilgrimage is near Udaipur so you can reach the Udaipur airport and from there you can hire a taxi or can go by bus to Ranakpur. Udaipur is connected to all the major cities of India.

By Road:
Ranakpur is also well-connected to many big cities via roads and a dense network of regular buses. Both private and buses can be availed from places like Chittorgarh, Ahmedabad, Vadodara, Mumbai and Indore to reach the shrine.