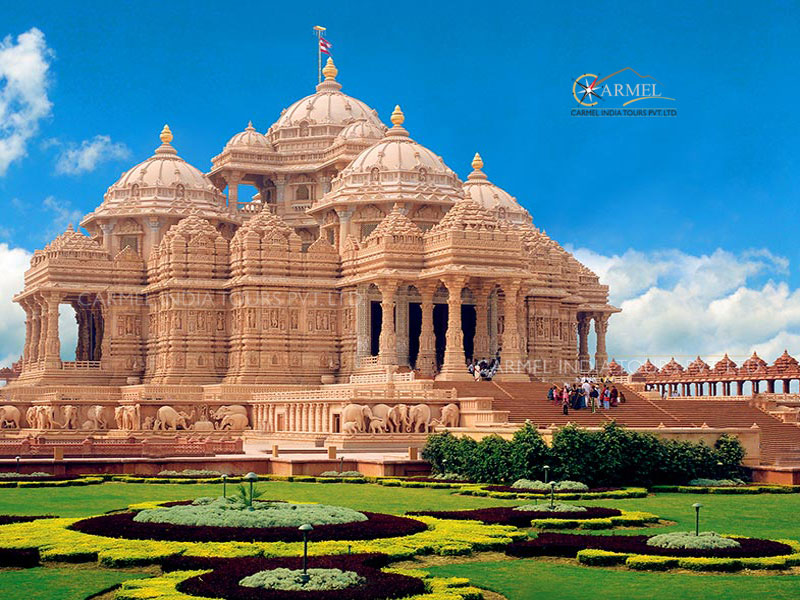 Ahmedabad, the commercial and cultural capital of western Indian state of Gujarat, Situated on the banks of Sabarmati River. It is one of the most important modern and the fastest growing cities of India and has a lot to offer to an art lover and cultural architecture. This city is correlated with Mahatma Gandhi; Father of the Nation, his ashram is located on the banks of river Sabarmati. Today it is a site of national pilgrimage.

The city is named after a Sultan Ahmed Shah, who founded it in 1411. Once the sultan was standing on the bank of river Sabarmati and noticed that a tiny hare chasing a strong ferocious dog. His spiritual adviser explains it and said, it is the uniqueness of this land that cultivates such rare qualities in its people. After knowing this fact the sultan got so impressed and decided to set up the capital of Gujarat over here and he called this land Ahmedabad. After the rule of sultan, Gujarat was captured by many rulers like, Mughal Rule, Maratha Rule and in the year 1818, the city was taken over by the British East India Company. In 1915 it became famous as the site of Gandhi?s ashram and people of Ahmedabad raised their voice for the independence of India. After independence of India, Ahmedabad became a provincial town of Bombay, and on the 1st of May in the year 1960, it became the capital city of Gujarat.

The city is today the second largest prosperous city in Western India and a great textile and commercial centre and known as the 'Manchester of India'. It is an exciting combination of traditions and modernism, and attracts all visitors with its diversity of places, religious and ethnic communities. Ahmedabad also enjoys a thriving cultural tradition, being the centre of Gujarati cultural activities. Ahmedabad is famous for a wide range of festivals. Popular celebrations and rite include Uttarayan, an annual kite-flying day on 14 and 15 January. The most popular folk dance of Gujarat Garba is performed by the people of Gujarat on the occasion of nine nights of Navratri pooja.

Best Places to Visit in Ahmedabad

Gandhi Ashram
It was from here, in 1930, that the Mahatma started on his famous 'Dandi March' to the sea to protest against the Salt Tax imposed by the British. 'Hridaya Kun', the simple cottage where he lived, is preserved as a National Monument. A Gandhi Memorial Centre, a Library and a Sound-and-Light show offer indepth insight into the Mahatma's life and work. During the lifetime of Mahatma Gandhi it was known as Satyagraha Ashram and was the centre of the struggle for Independence.

Bhadra Fort
This beautiful fort was built by Sha Alam in the year 1411; this fort got its name from the Bhadrakali temple it houses, located in the midst of lush greenery that amounts to 44 acres, the fort depicts the history and life of Alam Sha and his family. The most fabulous edifice in the fort is the lovely arches in the entry gate, which shows some inscriptions regarding the history of the fort.

Teen Darwaza
As the name whispers, Teen Darwaza is the triple domed gateway that faces the majestic Bhadra Fort. This massive gateway with hassled stone work is built in the reign of Ahmed Shah. Teen Darwaza is the place from where the royal family of Sultans used to watch the lively processions from the palace to the nearby Jama Masjid. It is learnt that Jahangir and Noorjahan were very fond watching the colourful pageants. Teen Darwaza offers the spectacular view of the beautiful shrine whose architectural grandeur arrests the attention of every visitor.

Hussain-Doshi's Gufa
It is a gallery housing the collaborative efforts of artist M. F. Hussain and the architect B. V. Doshi. Here, art and architecture fuse to become a unique experience, both complementing each other magnificently.

Calico Museum
The Calico Museum of Textiles, widely regarded as one of the finest textile museums in the world was constructed in 1949. The Museum houses no less than five centuries of the finest fabrics spun, woven, printed and painted in different parts of India. It also has a collection of marble, sandstone and bronze icons and busts split in two thematic sections-gallery for religious textiles and historical textiles.

Jama Masjid
Built by Ahmad Shah in 1423, Jama Masjid is the principal mosque of the Islamic era, situated at the heart of the city. The mosque has 260 pillars supporting 15 domes arranged symmetrically. A special feature of the mosque is the Muluk-Khana, or the Royal Gallery, which is a platform standing on pillars and enclosed upto the roof with beautiful stone work.

Siddi Bashir Mosque
The mosque was obviously built by master craftsmen and the crucial mechanism that causes the vibration is still a mystery. Known as Shaking Minaret or Jhulta Minar. When one minaret is shaken the other one begins to vibrate.

Rani Rupmati's Mosque
Named after the Hindu wife of Sultan Mohammed Beghara, this mosque has three domes supported by pillars with the central dome slightly elevated so as to allow natural light into the mosque. The mosque has richly carved minarets, balcony windows and perforated stone lattices. Its three domes are linked together by a flat roof.

Hatheesing Jain Temples
This is the best known of Ahmedabad's many ornate Jain Temples. Built of pure white marble, the temple is a two storied structure with elaborate porches on three sides and front porch crowned by a large dome.

Kankaria Lake
A circular lake constructed in 1451 by Sultan Qutubub-Din. At the centre of the lake is an island garden with a summer palace, known as Nagina Wadi. The lake is a popular recreation centre surrounded by parks, 'Bal Vatika', an aquarium, a boat club, a natural history museum and a zoo.

Sidi Sayed Jhali
The Mosque of Sidi Sayed, near Lal Darwaja is world-renowned for its magnificent stone tracery, in particular, the splendid Jali screen, framed, in ten semi-circular windows.

Manek Chowk
It's amongst the most popular market areas in the city renowned for its gold trade market. Situated on the east of the Jama Masjid.

Science City
Science City is an educational centre, which is focused on science and technology. This science city was set up in 1960, with a motive to spread awareness about the progression of science and its application in human life.

Sultan Ahmed Shah Mosque
Located towards the left side of the Bhadra Fort, this mosque is one of the oldest mosques in the city. The prayer hall of the mosque, which is known as Mehrab is designed using black and white marbles.

Swami Narayan Mandir
Swami Narayan Mandir, located in the heart of the city, is one of the popular temples in the city. Designed similar to a traditional Gujarati mansion, this temple comprises nine tombs that are located on the southern side.

Ahmedabad has a warm dry climate, except for rainy seasons. Summers (March to May) are extremely hot with an average mercury level of 36°C with extreme sometimes touching up to 45°C. Monsoons (June to October) are rainy seasons with medium to heavy showers. Winters (November to February) offer a mild windy cool climate.

How to Reach Ahmedabad

By Air
Ahmedabad Airport is Sardar Vallabhbhai Patel International Airport, which is about 14 km from the heart of the city. Airport is connected with all major cities in India and also with many cities in abroad, like Muscat, New York, London and Colombo.

By Bus
Ahmedabad has good highways connecting it to all major places in Gujarat and other states. The roads are smooth four-lane highways in some parts of the state and two-lane elsewhere, but all roads are well maintained. Interstate buses of different states of India provide services to and from Ahmedabad.