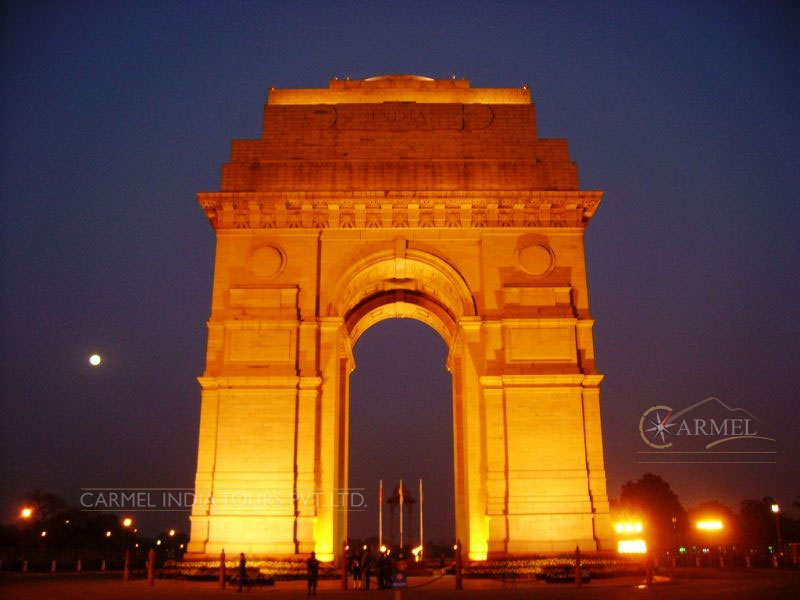 Delhi, the heart of India, situated in the West Bank of the river Yamuna, with an area of 1483 sq. Kms. It's truly a place where thousands of years of history meet the present in a contemporary and unique avatar. Delhi has served as a capital of various kingdoms and empires, according to the great Indian epic the Mahabharata (1400 BC); it was the capital of the Pandava princes known as Indraprastha.

It is said that Anagpal Tomar first laid the foundation stone of the seven ancient cities of Delhi. Prithviraj Chauhan was the last Hindu king who ruled the ancient Delhi and played a major role in shaping the history of Delhi. The Chauhan rulers took reign of Delhi city in 1155 AD from the Tomar Empire. The rule of Prithviraj Chauhan continued till 1192 AD. After this great Hindu ruler, Mughal rulers ruled the city in succession starting from Qutab-ub-din to Khiljis, Tughlaqs each, under a different name given to the city.

The modern capital city of India is a combination of Old and New Delhi, each representing different experiences. Old Delhi used to be the capital of the Mughals under Shah Jahan whereas the New Delhi used to be the imperial capital of British Raj. It is sprinkled with glittering gems like: captivating ancient monuments, magnificent museums, a lively performing-arts scene and some of the subcontinent's yummiest places to eat.

Delhi blends within its folds the great cultural variety of India. Delhi is just not a city but it is a book, which narrates the history of India. It is correctly said that Delhi is a land of Dilwalas or for people with heart, where every moment becomes a moment of history.
Climate: During the summers the average maximum temperature is 40°C and minimum temperature is 25°C. The winter extends from late November to February. The temperature in winters varies between 21°C to 5°C. January is the coldest month when the temperature drops to a minimum of 0 °C.

Best Places to Visit in Delhi

The India Gate: The India Gate is the national monument of India,situated in the heart of New Delhi. Built from sandstone, the arch also houses the Eternal Flame, a gesture in memory of the Indian soldiers who laid their lives in the 1971 war with Pakistan.

Raj Ghat: The mortal remains of Mahatma Gandhi were cremated on this spot on the west bank of the river Yamuna on the evening of January 31, 1948.

Rashtrapati Bhavan: The official residence of the President of India, it stands at the opposite end of the Rajpath, from India Gate. This building is an interesting blend of Mughal and western architectural styles.

Sansad Bhavan: The Indian parliament building stands almost hidden and virtually unnoticed, at the end of Sansad Marg, which was given pride of place during the time of the British Raj, when New Delhi was conceived.

The Red Fort: The Red Fort is one of the most magnificent palaces in the world, built by the Mughal Emperor, Shahjahan in 1648, designated as the UNESCO World heritage site.

Gurudwara Sis Ganj: An important Sikh place of worship. Built on the spot where their ninth guru, Guru Tegh Bahadur, was beheaded. You will need to cover your head (scarves provided for free) and stash your shoes in the shoe storage run by volunteers.

The Qutub Minar: A fine example of early Afghan architecture, as a tower of victory is not only one of the finest monuments in India, but also in the world.

The Akshardham Temple: Akshardham or Swaminarayan Akshardham, the complex displays millennia of traditional Indian and Hindu culture, spirituality, and architecture.

Lakshmi Narayan Mandir: Built in 1938, the temple contains a large number of idols and visitors can also watch priests performing ritualistic prayers and is commonly known as Birla Mandir.

Baha'i Lotus Temple: Shaped like a lotus bud with 27 petals, this stunning temple suspended above milky-blue ponds is surely one of the most magnificent monuments ever made from concrete.

Humayun's Tomb: The first mature example of Mughal architecture in India brought with them a love for gardens, fountains and water.

Gandhi Smriti (closed Monday): This estate is the site of Mahatma Gandhi's martyrdom. Includes a museum celebrating his life and the room he lived in during his final days.

Shopping Hangouts
Chandni Chowk: The colourful shopping bazaar, known as Chandni Chowk in Main Street of Old Delhi. It was the eyes and ears of the Mughal's commercial instincts and is today one of the country's best known wholesale markets for textiles, electronic goods and watches.

Connaught Place: One of Delhi's most popular shopping centres built as early as 1931 there is nothing that one cannot buy here and it also has several eating houses.

Dilli Haat: Food and Crafts Bazaar is a one-stop shopping place for tourists, which not only offer various arts and handicrafts of India, but also a taste of the ethnic cuisine.

Khan Market: The market for the elite, it has been rated as the costliest retail location in India. It is situated in one of the greenest pockets of the city, very close to the famed Lodhi Gardens.

How to Reach Delhi

Air: Delhi has an extensive network of international and domestic flights. The Indira Gandhi International Airport connects Delhi, to the world. On the domestic front, it is well connected with all state capitals and major metros all over India.
Train: By rail, Old Delhi, New Delhi and Hazrat Nizammuddin stations, connect Delhi to all parts of the country. All these 3 stations are located at a distance of maximum 5 km from each other.
Bus: Delhi is well connected by National Highways, to all the parts of the country and to all major destinations in North India. The Inter State Bus Terminus (ISBT) is located at Kashmiri Gate, Sarai Kale-Khan and Anand Vihar. It is also linked by bus services of Delhi Transport Corporation (DTC) and state roadways, of neighbouring states to all important cities, through Air Conditioned, Deluxe and Ordinary Coaches. Delhi is well connected by road, with many major cities like Mumbai, Kolkata, Jaipur, Jodhpur, Shimla, Nainital, Agra, Ajmer, Gwalior etc.